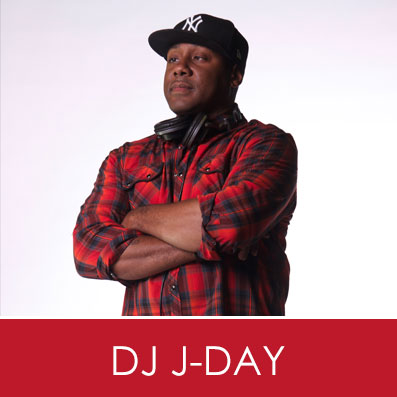 Growing up, in The Bronx in the 80’s, music was around J-DAY 24-7! His early access to music included genre’s ranging from Hip Hop, R&B, Dancehall, Disco, and House.

In early 2001, J began to perfect his DJ craft and soon after began doing parties in the Entertainment Capitol Las Vegas, NV. A student of the music, he quickly grasped the ever-changing popular music scene on the World Famous, Las Vegas Strip.

J-DAY became a mainstay on the Strip, playing an open format style of music, his ability to read crowds, and controlling dance floors in some of the hottest nightclubs. J-DAY has held weekly residencies at Club Asia inside Planet Hollywood, KOI Ultra Lounge inside Planet Hollywood, Brand Ultra Lounge inside The Monte Carlo, and Senor Frogs Nightclub inside Treasure Island just to name a few, in addition to weekly guest spots in some of Las Vegas’ best nightclubs, pools and lounges.

He is unafraid to experiment with new sounds, and his DJ sets “wow” the crowds with seamless transitions through all of today’s popular genres! Shaking dance-floors with a Open Format fusion of Pop-Dance, Electro-House, Disco, Old School, Reggaeton, Trap, Twerk and Hip Hop, J-DAY is consistent with ensuring audiences are entertained into the early hours of the morning.

His music is suitable for a wide range of events to include Night Clubs, Lounges, Corporate Events, Charities, Fashion Shows, In-Store Events, and Private Events. Some of his credits to date are Fantasia Barrino, Keyshia Cole, Too $hort, The Las Vegas SEMA Convention, EnergyX, Club Asia, KOI Ultra Lounge, Senor Frogs Night Club, Mike Tyson Charity Event, H&M Department Store, Guess Dept. Store, Armani Exchange, and he is also a member of the Dj Scratch Academy. DJ J-DAY will be taking his eccentric and outgoing personality on the road to a city near you, to please crowds with his musical ear and dance-floor worthy blend of classics and today’s top hits.