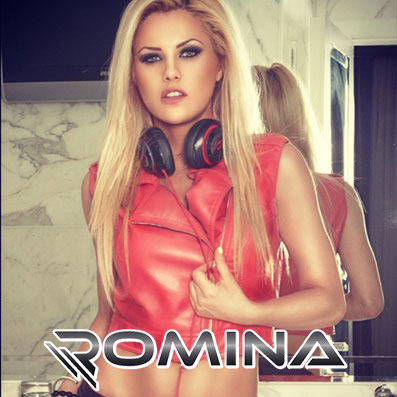 Originally from Predeal, a bustling city in the heart of Romania, Romina was influenced by her musical family from a very early age, and always felt a deep and passionate connection with music that continues to grow. As a teen, she knew that she wanted to become a DJ. Although Romina’s drive and ambition lead her to obtain a Law Degree at Baritiu University, she never lost sight of her inner child. “I studied hard in law school, and after being exposed and collaborating with a brilliant music producer  my desire for a career in the music business.”  Soon after, she bought a pair of CDJ’s and a mixer, and began her path towards destiny, and quickly developed the skills to perform at intimate venues, social events, select clubs and party cruises.

In 2012, Romina’s abounding energy, motivation and charisma, eventually brought her to Las Vegas, now one of the world’s House Music meccas. “It’s become an international hub for some of the biggest artists and DJ’s that are always pushing the envelope, and have the vibe that I believe in, including my top influences, David Guetta, Tiesto, Carl Cox, Paul Van Armin, Van Buuren, Above & Beyond.” Before long, Romina’s musical talents, coupled with her gregarious disposition and intuitive nature, brought her residency at the most famous clubs in Las Vegas and in the world -Drais and Tao Group.

Always in the pursuit of knowledge, self-improvement, and perfection, Romina wanted to hone her skills even further so she start focusing on music production.

As a further testament to Romina’s star potential, she entered the world’s largest and most infamous DJ Competition, the Burn Residency 2014. After only six weeks of voting, and with over 2,000 DJ’s entering the competition, Romina’s DJ Mix earned her a 1st Place finish in Romania, and 8th Place worldwide, a stunning achievement, and a true testament to her talent, and ability to captivate and motivate her listeners and fans.

Romina warmly invites you to stay tuned and join her in the journey, regardless of the destination.