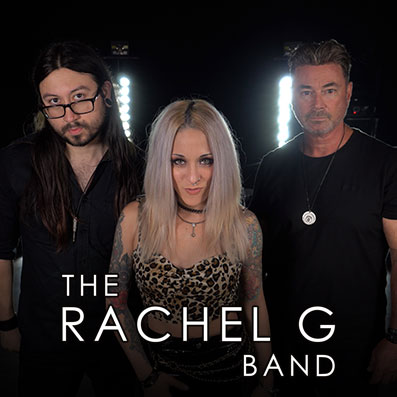 The Rachel G Band is a trio featuring some of the best players in Vegas (if not the world)! Performing classic, 90s, and modern rock with a current twist, their sound is huge! Artists range from Simple Minds, Journey, Eurythmics, Toto, Cheap Trick, Queen, Santana, The Killers, and Billy Idol.

Gabriel is a multi-instrumentalist prodigy best known for playing guitar, keys, and singing all at once! He has been featured in Spin, Revolver, Metal Hammer, and Guitar World is endorsed by Kiesel, Peavey, HeadRush, EMG Pickups, Cleartone Strings, and his viral videos have been shared by bands like Guns N’ Roses, Pantera, Iron Maiden!