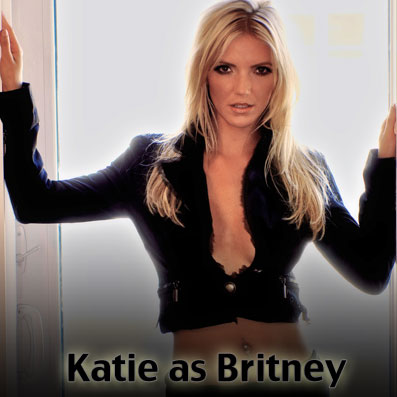 Katie grew up singing in front of audiences from the age of 2. As a child she loved watching her mother play the piano, write music and sing and was very influenced by her.

Her family recorded Katie along with her brothers and sisters in their basement studio, and sold their Albums in Utah retail outlets. She then moved to singing for people all over Utah for family concerts, at weddings, parties, and of course caroling at Christmas time.

Summer of 2005 she met a producer who was putting together a Britney Spears show in New Hampshire. Katie who had been told all through high school that she looked like the pop phenomenon auditioned and got the part. From this experience as her first ever paid performance, she realized that her dream singing professionally could become her career. So she packed up her bags and moved to the city of neon lights, Las Vegas, NV. She joined the world famous “Legends in Concert” show in 2006 at the ripe young age of 22, and has gone on to perform as a “Legend” on the Ellen Degeneres show in November of 2006. She has toured with Legends in Las Vegas, Atlantic City, Branson Missouri, and Norwegian Cruise Line ship, The Epic. Katie has also performed in Chicago, Texas and all around Las Vegas for Christmas parties and corporate events. “As Spears, Katie bears a striking resemblance to the pop princess. Her voice is true Britney and her stage presence is just as solid.